I have worked, and or am working on 7 commercial games. Of which 2 were released, 2 are under development, and sadly 3 were canceled.

Super Battlelands is a turn based strategy game with unit building and terrian capturing. Players must use their units wisely to amass a tactical and economic advantage against the opponnent.

Super Battlelands was made by me and Ren Phillips. I wrote all the code, including the AI, shaders, game engine, and game logic for Super Battlelands. I also handled map and game design. Ren Phillps handled 3d modeling.

The AI in Super Battlelands is essential to the player’s enjoyment and I spent significant thought and time on developing a world class AI.

On GUNDAM CROSS WAR I implemented the backend game logic, and the majority of card rules. CROSS WAR was a digital implementation of the simultaneously released card game of the same name. Players acquired cards by buying packs of physical cards then scanning a QR code on the back to register their new cards into the app. Each card contained complex rules and actions. Gameplay was similar to Blizzard’s Hearthstone but with full determinism to allow for non-app play.

I stayed on the project through the release of “Char’s Counterattack“, the first expansion pack set.

Example of a high level card and its associated rules. In this case the first rule is: “During your turn, if one of your units kills an enemy unit through damage then apply 3 damage to the enemy mothership. If the destroyed enemy unit possess IronDan or Teiwazu attributes then apply 5 damage.”. The second rule is of the rule class armor and reads “During your turn, if this unit has not yet moved and it takes damage to kill it from an enemy then instead of applying this damage and killing this unit instead mark this unit has moved.” Note: pilots are special cards which can ride units. Pilots bring further complications to the rule interpretations.

Hobby project of a friend

Pixel Pirates is a action platformer by the Hawken King’s Dadako. I provided additional programming by implementing the the conversations, inventory system, and all the shaders for the BITSUMMIT 2015 build. 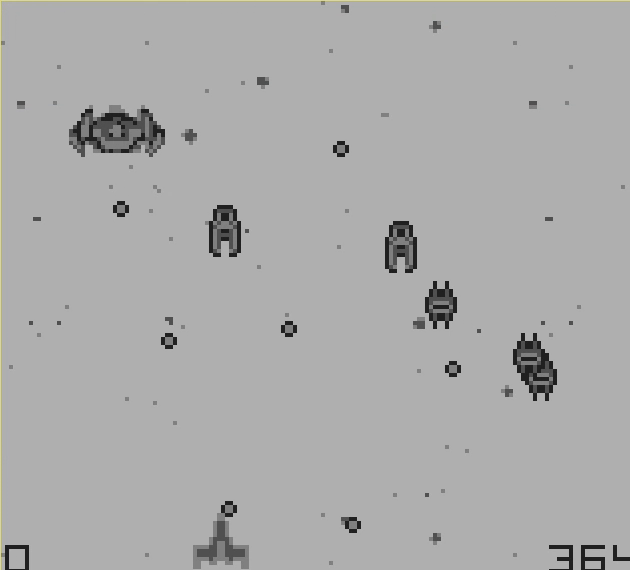 Mass Driver is a shoot-em-up for the original Gameboy programmed using a unoffical C compiler.

It features progressive difficulty waves, mini-boss fights, and big boss fights. The enemy flight patterns are randomly selected and were all constructed from a single circle lookup table. The complete lack of multiplication instructions in the Gameboy’s z80 necessitated this lookup table technique.

Mass Driver was developed as a capstone style project for the University of Calgary’s special Retro gaming course. Mass Driver won my team the top prize for the course. I handled game play programming, and the simulation engine. I also provided the optimization work which kept the game running full speed.

Kart Bounty is an arena kart combat game inspired by the balloon fight mode in Mario Kart and the multiplayer arena car combat from IdTech’s RAGE. It was written in C++ with OpenGL and Bullet Physics. I wrote the core game engine and the physics integration.

Kart Bounty was developed as a group capstone project for the University of Calgary’s Game Programming Capstone course. This course was taught by EA developers from Vancouver and 8 students were permitted to participate per year.

Daniel is making a game!

Railgrade is a cyberpunk tycoon railroad game with a strong focus on vertical terrain and industrial chains. If dense maps filled with trains are your thing please go to railgrade.com to learn more!

I work at AREA 35 in Tokyo as the Chief Programmer. My hobby is programming systems oriented games. Before entering the Japanese games industry I focused on operating systems.

AREA 35 is a small studio but we are always looking for skilled programmers. English-only is okay but Japanese is often used in non-programming communication.

TINY METAL is our latest release. Please check it out!

My preferred tooling is Unreal Engine. On the subject of developing with UE4 I have given presentations at both Unreal Fest Japan and Korea. Epic Games has both given our game an Unreal Development Grant and awarded me a UDN Hero badge. My hope is to see more engineers in Japan raising the quality of games development, and I see Unreal Engine as a big help in that.